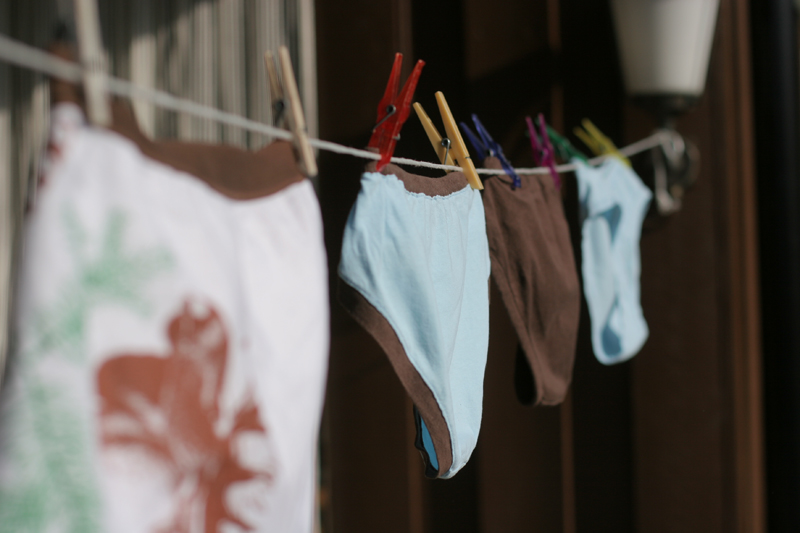 Yes, underwear! I made these. They used to be t-shirts, and now they are fully functional, very comfortable underwear. And happily quick to make.

The first thing to do, is find some suitable t-shirts to cut up. I’ve used gifted and thrifted t-shirts, but my closet is under close scrutiny at the moment. I prefer my cotton straight up, no synthetics, and the softer (and thinner), the better.

As I’m no genius at pattern-drafting, I thought sticking with my favorite pair of undies as a model was the best bet. It was quite finicky to make this not-so-big 3D garment translate in to a 2D pattern, but it’s perfectly doable, especially with a little patience and persistence. In cutting the pattern pieces out of the t-shirts, I’ve generally just squished them all in there to get as much out of my t-shirt as possible, but in the future I am going to put down the pattern pieces horizontal on the t-shirt, to get more stretch in the underwear. And this I know from experience now: some t-shirts are naturally quite stiff and has very little give, and that means there is a greater chance of seams tearing, so stretchy t-shirts are good (I guess better luck next time in making underwear for the boy). 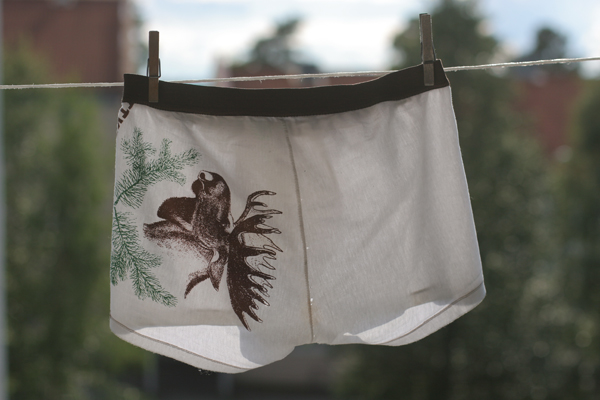 (It’s a moose. Too bad Guttkes Fritidsstugor printed his moose on such a stiff t-shirt.)

I’ve even managed to use the neckband of the old t-shirts as waistbands for a couple of the new undies. That makes me quite happy. Also, I’m quite happy with the stitch-in-the-ditch sewing and nice seam finishing on some of these, most visible on the brown underwear in the picture below:

For those who suddenly got an urge to get up and make themselves some underwear, there are some patterns and tutorials out there, like this one at Supernaturale, and this one over at BurdaStyle.

The color scheme of my underwear collection was in no way planned, but brown is a very good color. I’ll end with a picture of the very first undies I made. It looks like the t-shirt would have read ”Alabama” at some point, but it really didn’t. The word was ”Alaba”. Huh. 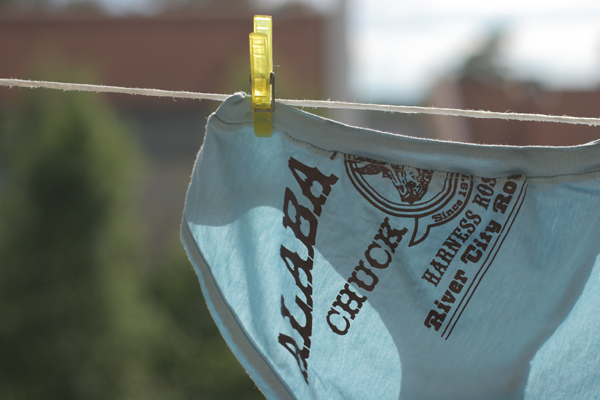 (eta: thanks to the boy for the pictures)

5 thoughts on “i make underwear” 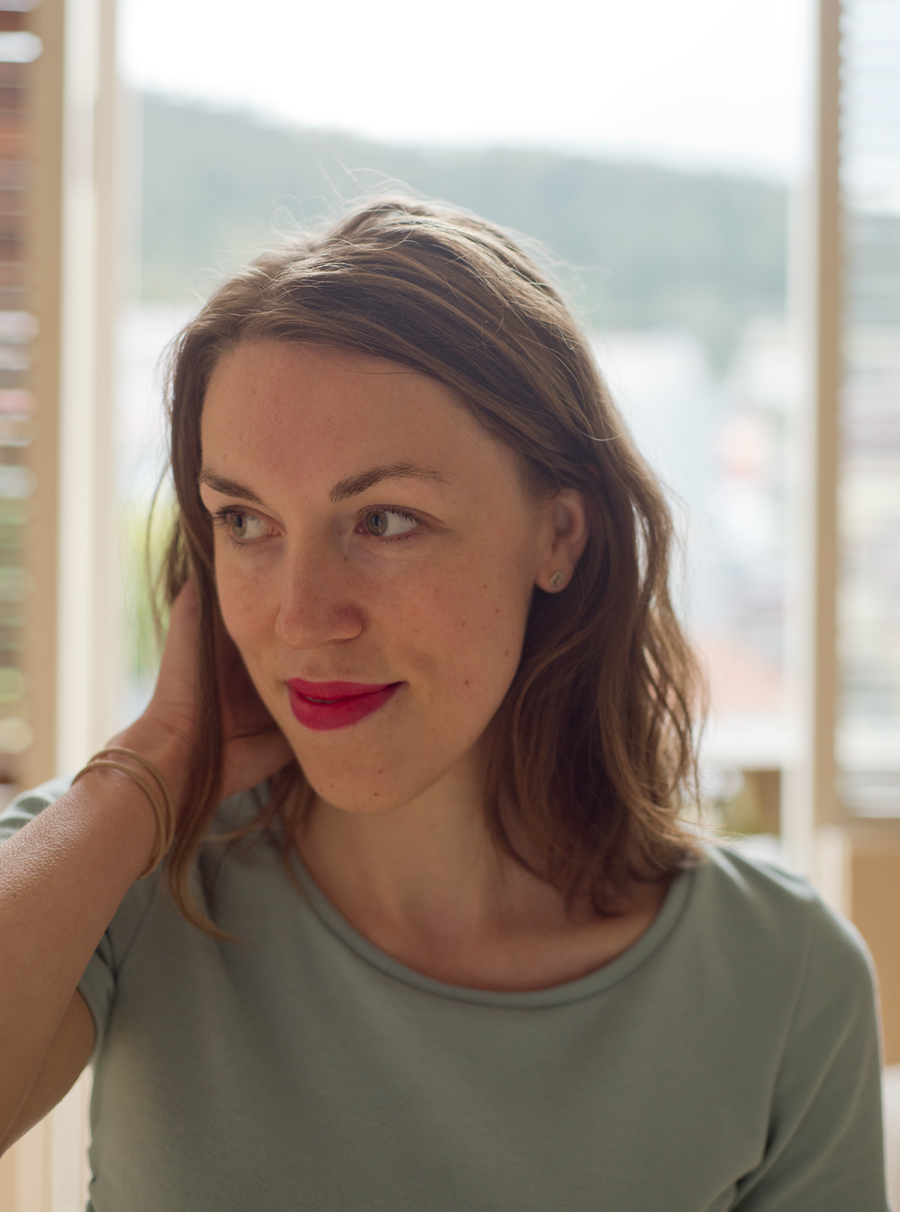 Hi! I'm Birgitte, and I make things. Usually I sew clothes for myself, or knit something from stash yarn, but I like *making things*. I am a teacher, and I've done costume and custom sewing work which you can take a look at on the portfolio page.

Lyden av tørt løv.
My favorites from the past week. *** There is a wedding tomorrow, and I cannot wait to celebrate love, and to see my dear friend wear the dress I made with love. I cannot wait. *** And art - both Fallen Fruit by David Allen Burns/Austin Young @kunsthall314 and Tidens berøring by Kari Aasen @kraft_bergen were excellent, and reminded me how important art experiences are to me. *** Walks in sunshine. Always. #sewingweddingdress #turistiegenby #mertur
En siste sommerdag, og plommer til middag i fineste museumshagen.
It's sewing time at casa Birgitte! In six days I'll see my friend the bride for a day and a half of final fitting and finishing, before she takes the completed dress with her. I am getting very excited, seeing the dress looking more and more complete! The past month has been all about construction and technical aspects; a skype fitting date, drafting a marker for the tulle skirt pattern placement, using the art room at work to cut out the bias skirts, sewing in twill tape to control ease on the front v-neckline, and joining lace for a symmetrical design. In the last couple of pictures the layers are just pinned together, but rest assured - thanks to lots and lots of hand basting, backstitches and machine stitches it is now very much sewn together! I have never attempted a more complex project - or a wedding dress, at that. As much as I am recognizing the massive skills of experienced and talented wedding dress makers (looking at you, dear friend and mentor @sewandsowchicago!), I am proud to notice that I have skills too - knowing to choose certain techniques, and knowing things not to do. It feels quite special to draw on every piece of sewing knowledge I have. #sewingweddingdress
Glimt fra norsk sommer, i omvendt kronologisk rekkefølge. Bystrand, oppussing og stoffklipping, fineste brunsjselskapet, utsikt jeg aldri blir lei av, mamma på besøk, Lom stavkyrkje, idylliske Vingelen, pappa i avisa, Grønfjell dekket av mose, koselig veite og fin dag i Trondheim.
I seem to be so behind trends that I can't even find the hashtag from a week ago, with people showing what their sewing (spaces?) looked like right at that moment. (Eta: #sewinginreallife!) Anyways - a week of summer vacation later, and I still want to share what it looks like when I work on #sewingweddingdress! Stuff everywhere, and an armchair to help wrangle lengths of fabric while ironing. I've made a third muslin, this time with final fabric and spiral steel boning and all. Mailed to NY, so looking forward to seeing how it fits soon!